Ethereal Worlds is an exclusive and limited collection of 27 Genesis 1/1 NFT art masterpieces boasting unprecedented utility through premium Space experiences and the worlds first to offer one lucky holder the chance of a once-in-a-lifetime flight into Space.

The collection has attracted the attention of Celebrities and Leaders within the Space community. Ethereal Worlds is dedicated to paying tribute to and celebrating pioneering women within the Space and aeronautical industry who defied the odds, disrupted the status quo and changed spaceflight forever. Each piece acts as an exclusive whitelist pass for all future collections.

As seen in and attracted attention from:

Just 11% of astronauts so far have been women, and no woman has yet walked on the Moon.

We are on a mission to change this by; raising awareness, advocating equality and diversity in the space industry, and by empowering and supporting the new generation of girls who have dreams of space travel and walking on the moon. We will be donating a portion of funds to The U.N. Space for Women Office and select charities.

Female Astronauts / individuals who blazed a trail in space include the following (click)...

More recently, 9 of the 18 Nasa Artemis Astronauts are women one of which will could be the first woman on the moon in 2024.

The Genesis pieces were sold out, however you maybe able to obtain them on OpenSea.

We are now working on the second larger collection dropping early 2022 – join our Discord for updates.

There was a time when most common folk believed that our physical world was the centre of it all. But there were others – a brave and curious few who looked beyond within the metaverse and the furthest corners of universe that would change the course of history as we knew it.

Hover over images for description of each

The Metanaut has long since known that there was only one true companion that she could call her own. It was not a single being or even a single world, but the love and splendour that she felt for the experiences and connections she made that were unforgettable throughout the Ethereal Worlds. She pledged to the moon - her constant companion glistening behind ancient ruins that she would remain true to her soul and never stop her journey through the beautiful unknown.
It was at times like this, even more than others, that she appreciated the destiny that she had formed for herself. Surrounded by magical flowers and plants on a newly discovered world, re-energised her for further travels and allowed her to reflect on all that she had explored and experienced. Comfortable in the fact that should she fall asleep, she knew that new enchanting adventures would be waiting for her when she awakes.
The Metanaut still recalls the first time she floated through the abyss, pulled lightly along by the gravity of a world that was not her own. The weightlessness was like the hug of a long-lost friend that was welcoming her to a home that she did not even know she needed. She believed that she had known what home was before. But as she reached out to touch the remnants of the tail of a passing meteor, she realized that what she had thought of as home had never brought the kind of feeling that she was experiencing now.
Although the Metanaut has seen wonders and beauty in galaxies the likes of which ordinary people will never see in their lives, there are times when she will discover deserted worlds that are seemingly lifeless. Upon her discovering a mysterious glowing blue object amidst the cold darkness - the only reminiscence of past life, a bright star began to shine once again igniting the Ethereal world with a blanket of warmth, light and love.
Soaring in the outer atmospheres of the alpine planet, the Metanaut sensed a powerful force. As she harnessed it, the energy surged throughout her soul. Within the ultra-high elevation of this newfound kingdom, she could feel her feet lift from the ground as she rose amongst the clouds like a winged phoenix whose spirit could not be constrained. The light was absorbing through her suit as she beheld a power that she was yet to fully understand.
Even when she was surrounded by far-away civilizations, the Metanaut was longing for something more. She cherished the hospitality of these homely creatures, although the calling of her destiny remained strong. As she rested under the protection of cosmic vegetation, she resolved to continue her mission with a sense of love, fearlessness, and a dream to defy perceived limitations.
The time had come for the Metanaut to reach even farther while pushing her mind, body, and soul to the absolute limit. As the heat surged from a sea of magma below, the coolness of the captured energy kept her temperature in check. Now, the power of the emotions she had been feeling throughout her entire journey was revealed. At the start of her journey, she couldn’t imagine venturing to such a harsh planet. Now, she was able to absorb the radiant energy to power her future adventures.
The Metanaut’s journey has been long, yet she could not be happier with all that she has been able to behold. Still, the desire to return to Earth to bask in the beauty of the cherry blossom trees calls upon her often. They are still one of the most beautiful sights, reminding her of the roots from which they grew from. Yet she never lingers long. All she needs is to feel the pull of wonder that first made her step away from the familiar. Sometimes, though, that pull comes before the Metanaut is ready to go.
Having experienced a myriad of uncharted worlds, the Metanaut was ready to embark on the most important journey of all. Now that she was at one with the ethereal energy, she felt a calling to reconnect with her roots at the origin of Space travel. Confidence had pulsed through her body planet after planet and she was now prepared to blast off and discover the true meaning of her mission.
All throughout her travels, the Metanaut sensed an unfilled void. From the edge of the universe to the colonies of cosmic clusters that she explored, community was the missing piece. She connected with fellow female journeyers through Ethereal Worlds and finally their true calling and destination was realised. As they peered at the place they once called home, they remembered the nights spent staring up at the Moon where they now currently stood. They inspired. they trailblazed. They won.

Offering premium space experiences and the worlds first to offer one lucky holder the chance of a once-in-a-lifetime flight into space. 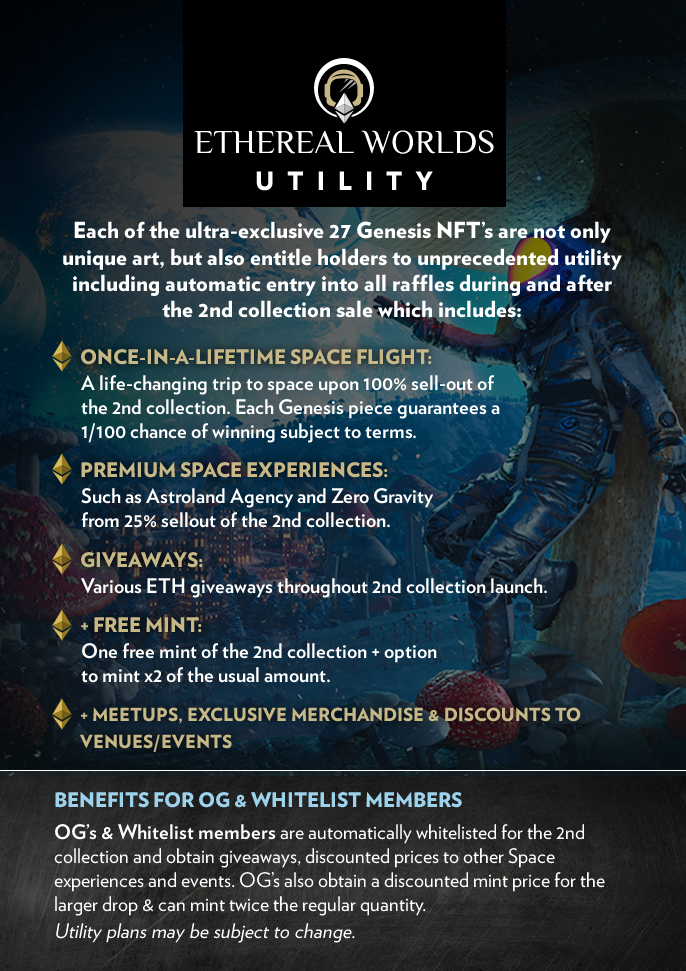 * The Spaceflight is subject to 100% sell out of the following larger collection. 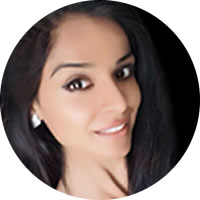 Rupa Shinh is a successful and well-respected 20-year Multi-Award-Winning Serial Tech Entrepreneur, CEO, Mentor & Advisor to Government Subsidiaries, diplomats and Venture Capitalists which collectively have an excess of £5bn under management. Rupa is a serious Investor in women-led start-ups within the Space, NFT, Crypto, Blockchain, AI and AR industries. Her prestigious accolades include: Management Today’s Inspiring Women, Ernst & Young’s Entrepreneur Of The Year Nominee, DigiLeaders 100, Amazon Scale-Up Awards (supported by Britain’s top financial institutions), Business Elite’s 40 under 40, Successful Women In Business, and The Props alongside Knight Frank and Coutts among others.

She is also Founder, Visionary force & Creator of Ethereal Worlds – the World’s First Exclusive NFT Collection to send a holder on a Spaceflight and advocates and celebrates pioneering Women In Space. The collection has attracted the attention of Celebrities and Leaders in the Space community. Just 11% of Astronauts so far have been women, no woman has yet walked on the Moon and opportunity for Space travel is limited. Rupa is on a relentless mission to change this by creating a Movement by; raising awareness, advocating equality and diversity in the Space industry, inspiring the new generation of girls and women for Space travel, dreams of walking on the moon and expanding access to Space for humanity by offering a spaceflight to a lucky holder. A portion of funds raised will also be donated to various organisations such as IgnitedThinkers and other charities and institutions within the Space arena. 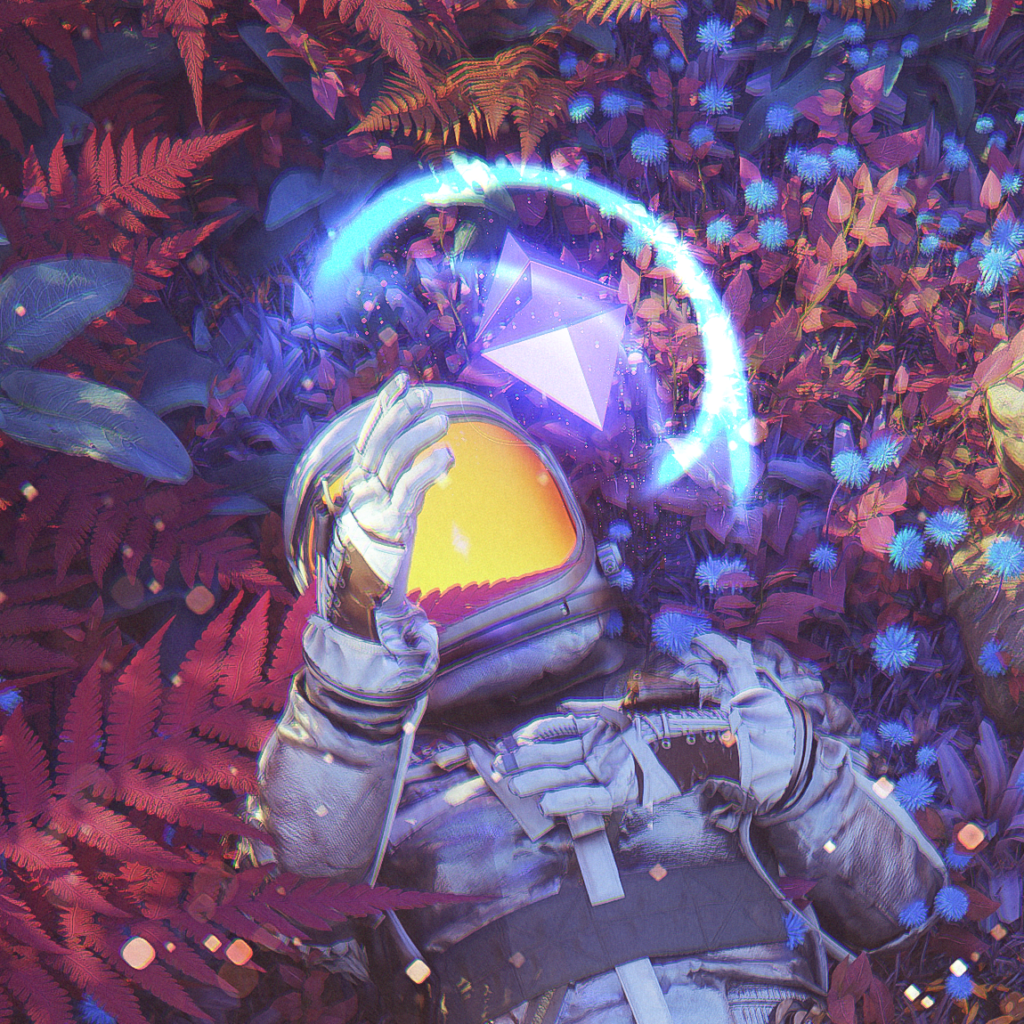 A few of the many organisations we will be supporting

Space4Women is a project of the United Nations Office for Outer Space Affairs (UNOOSA) to promote women’s empowerment in space.

St. Jude is leading the way the world understands, treats and defeats childhood cancer and other life-threatening diseases. 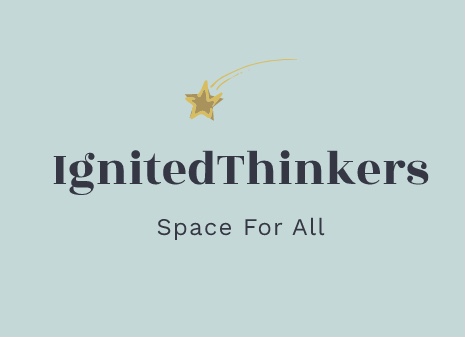 IgnitedThinkers is a non-profit organization founded by Gitika Gorthi, a senior in Chantilly High School and an aspiring aerospace physician and astronaut, to spread her love for space sciences to students across the world (www.ignitedthinkers.org). Through partnering with over eleven global organizations, IgnitedThinkers works to make the space ecosystem more diverse and equitable through free workshops/webinars, incorporating more space education in school curriculums, conducting Space Champion Interviews to highlight diverse aerospace enthusiasts, and helping students to explore space sciences through many different initiatives.

The Genesis pieces were sold out, however you maybe able to obtain them on OpenSea.

We are now working on the second larger collection dropping early 2022 – join our Discord for updates.